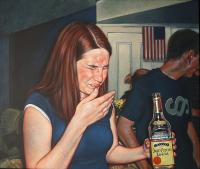 The Ambassadors *RESERVED*
acrylic and oil on canvas
54 x 36" 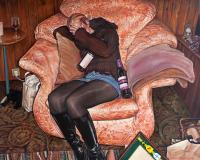 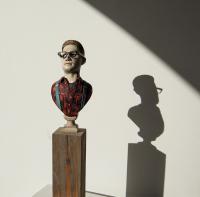 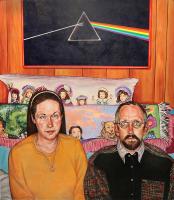 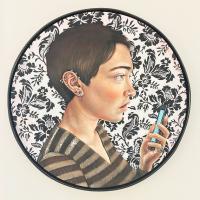 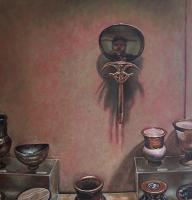 The Wrestler
acrylic and oil on canvas
36 x 48"

Wearing the Horns
acrylic and oil on canvas
24 x 36"

Cam Wallace is 37 years old, and grew up in Edmonton, Alberta.  He began drawing in earnest at the age of four, and finished his Bachelor of Fine Arts degree at the University of Alberta in April of 2000.  For the last fourteen years he has maintained a studio practice, and works as a Technician for Visual Fundamentals & Drawing at the University of Alberta.  He focuses on acrylic and oil portrait painting and is an active member of the Northern Alberta Wood Carvers Association.  He teaches both art and the great highland bagpipe, and is currently learning to play the guitar in his one spare hour a week.

“Recently, contemporary painters have tried to revive the narrative in painting.  I admire some of them for their courage and skill, but the narrative paintings they’ve produced haven’t been convincing – the subjects seem self-conscious – either overly anecdotal or arcane.”                -William Bailey

The greatest challenge and satisfaction for me as an artist is to paint people.  Portraiture allows me to paint what interests me about a person – his imperfections, interactions, triumphs and failures.  I first became interested in portraiture while still in school. I was struck by a photo of an anonymous person concealed by a mask and top-hat in a magazine article.  The impact of that image stayed with me, and I began seeking images with a similar intensity, but nearer to my own experience.

To distance myself from a subject, I collect found photographs for reference.  This allows me to avoid sentimentality in a painting, and the best of these found images contain a story in motion; a ready-made dialogue.  Many of the collected photographs have been discarded as worthless.  Some have been overlooked simply because of the great number of images available in the digital era.  I've found (or been given) source pictures from several avenues -- dumpsters and recycling bins, family and friends’ albums, thrift stores, and most recently, online.  Many of these portraits represent isolation or unease.  Often, they represent the loss of privacy in an environment where cameras are so much a part of the landscape that many people are no longer even aware of them.  However, I also see the individuals in these portraits able to transcend the trials of everyday life through humour and determination.

I paint only the images that compel me, subjects that resonate with me long after the first viewing.   Recently, the painting process is becoming much more personal; I’m editing and challenging the source material. What began as a documentation of a subject has evolved into the altering, updating, combining, and re-inventing of an image.  Painting from found photographs has become, for me, an excavation through multiple layers of meaning and interpretation which have been projected from my own experiences.  My hope is to begin a painting in the same position that each viewer will eventually come to it – as a mystery to be unravelled.