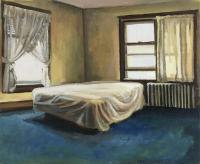 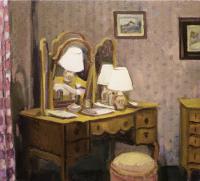 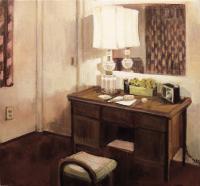 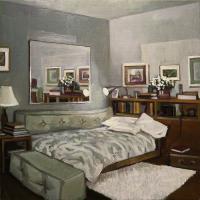 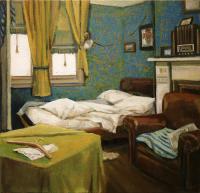 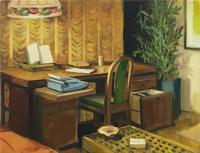 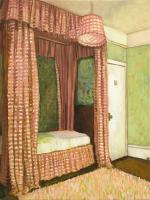 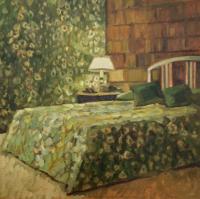 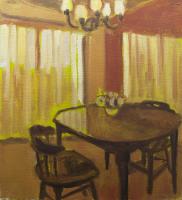 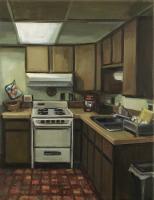 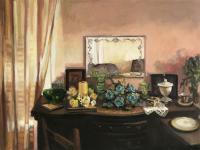 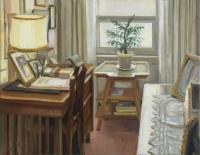 My work deals with a wide range of conceptual ideas that are filtered through the lens of personal experience and grounded in the history and development of painting. It is my goal to utilize and manipulate the tradition of realism to help create unease within my rendered spaces. By painting images of the domestic realm I hope to capture my interest in social role-playing and my own struggles to define my belonging. Focusing on creating mood with the dramatic use of light and shadow, the private living rooms become a stage in which a range of social interactions play-out. As all space is defined by activity, void of the creators, rooms will always remain haunted revealing the true motivation of the social structure that supports it. My aim is to have the spaces reflect the middle class ideals and gender roles of the people who should be present not unlike the 17th century Dutch Genre painting I openly reference. With the aid of banal everyday activities and social traditions a framework hides for future generational relationships are encoded. I am interested in suggesting the value systems found in gender, family, privacy, intimacy, comfort and luxury, while encouraging the viewer to think about the domestic spaces of past and present relevant to his or her daily life. Gaston Bachelard in The Poetics of Space writes, “A living creature fills an empty refuge, images inhabit, and all corners are haunted, if not inhabited”. In this way the very geometry of a room is simultaneously full and empty.

In Henri Lefebvre’s The Critique of Everyday Life he writes of the disconnection and alienation found in modern everyday life. In a cyclical fashion, the desire for leisure and wealth takes us away from our homes. The more we are away from the place that defines our values and meaning, the more we feel alienation. The more we feel disconnected the more we desire to replicate and emulate this ideal of “home”. Lefebvre writes to see properly the errors of our ways “we need to place them at a reasonable, well-judged distance, like the objects we see before us. Then their many- sided strangeness becomes apparent: in relation to ourselves, but also within themselves and in relation to themselves. In this strangeness lies their truth, the truth of their alienation. It is then that consciousness of alienation – that strange awareness of the strange – liberates us, or begins to liberate us, from alienation.” (Lefebvre p. 20). At the heart of my research is a desire to utilize this sense of “reasonable distance” both formally in my choice of compositions and colour and metaphorically in painting as a means to draw attention to our relationship to specific sociological symbols and to question how we find meaning in the every-day activity as well as the spaces we reside. Steeped in art historical references, I purposely create multiple narrative entry points compositionally suggesting a voyeurs’ hiding place alongside my forensic inventories and secret desires.