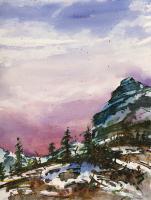 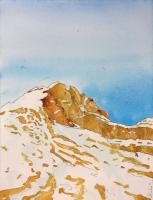 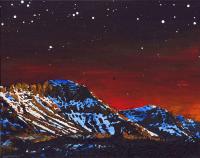 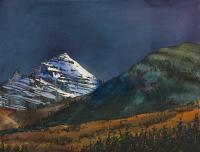 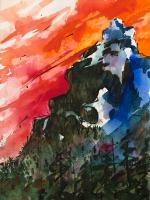 Little One
watercolour on paper
10 x 7" 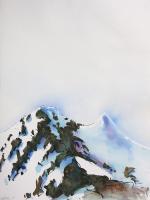 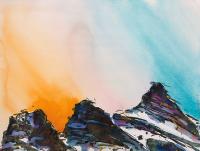 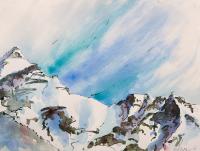 The Halfway
watercolour on paper
12 x 16" 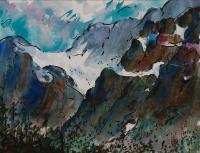 Joel Sinclair was born in 1970 in Edmonton, Alberta, Canada. Growing up on an acreage in the country gave him a deep love of nature, and from an early age, he interacted deeply with the natural environment around him. Through the influence of his father, Robert Sinclair, he was immersed in the art world and exposed to many aspects of creative expression.

In 1992, he attended The Alberta College of Art and Design in Calgary, Alberta. With a major in Visual Communications, he left college in 1996 and started a very successful web design firm. But after 12 years of successfully melding left and right-brain activity, he made the decision to step away from the world of computers and immersed himself 100% into his creativity and spirituality.

Today, he is an award winning professional Canadian artist whose paintings are recognized for their spirit, intensity of colour and dramatic sense of energy. He is represented commercially throughout Alberta and shows his work across Canada.  He’s also an elected member of both the Canadian Society of Painters in Watercolour and the Society of Canadian Artists, and a full member of the Alberta Society of Artists.

Currently, he works plein air as well as out of his studio, which is located in downtown Calgary, Alberta, Canada.

“I approach my work in a non-traditional manner as an exploration of flow, energy, texture and spirit. I am fascinated with the human aspect contained within painting and work specifically to avoid 'perfect' renderings by exaggerating strokes and colour to create a sense of energetic movement. I am not attempting to capture a perfect vision, but rather, the feeling, energy and timelessness of life's dance.

My work is rooted in my spirit and love of life, and my paintings are an expression of this ongoing relationship and an exploration of the never ending dance between the masculine and feminine. My main focus is to incorporate and capture the energy of this dynamic into the paintings themselves, and perhaps reveal a glimpse of the power of creation.