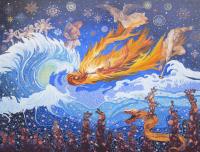 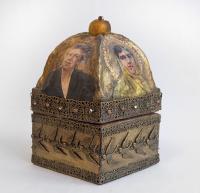 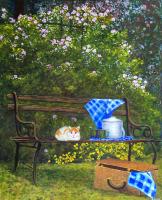 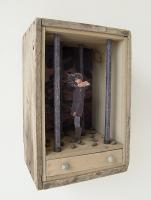 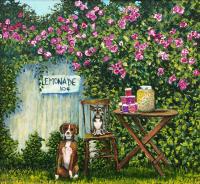 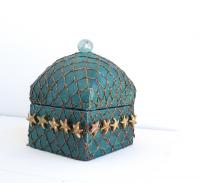 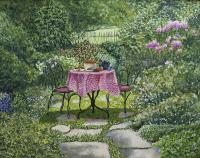 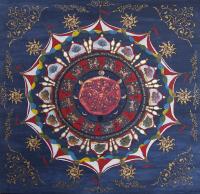 In 1999, I graduated from The University of Alberta with a Master's Degree in Art History.  Since then I have focused my artistic endeavors on landscapes, florals, collage, and assemblage pieces. Though my landscape and floral paintings are in a realistic style, they give expression not simply to the world around me, but to my relationship with that world and therefore express an inner as well as an outer vision.  The collages and assemblages that I construct communicate an entirely inner vision.

My painting is influenced by the early American romantics of the Hudson River School and the Luminist School, men such as Thomas Cole, Albert Bierstadt and George Inness.  Their large expanses of terrain, luminous light and sense of spiritual meaning in the land are also qualities I strive for in my own work.  However, my landscapes tend to focus on the pastoral rather than the wild and imply a  spirituality that is more private, inner and unconnected to  political ideals than the aforementioned schools.  It is a spirituality that owes something to the symbolist landscape.  I am also deeply influenced by the sensuality of the impressionists with their use of vivid color and lush, shimmering visions of cultivated nature.

My collage and assemblage works are informed by the methods of many twentieth century Western artists from John Heartfield, Hannah Hoch and Kurt Schwitters to Joseph Cornell and Jasper Johns.  I am also strongly influenced by the visual techniques used by cultures such as Tibetan Buddhism and aboriginal Australia.   In these pieces I combine a variety of mediums, including drawing, painting, photography, computer generated images and found objects to give expression to an interior vision that might come from a feeling, an idea or even a dream.  These works develop out of a long process and often take a number of years to come to fruition.